In normal times, the Bank of Canada stimulates the economy by lowering the target for the overnight interest rate, encouraging borrowing and spending. However, interest rate movements are restricted below by an effective lower bound (ELB) — a point at which investors would withdraw their money from banks because they prefer to hold cash for a return of 0 percent. Once it is reached, central banks must turn to other, unconventional measures to influence economic conditions.

In December 2015 the Bank of Canada updated its framework for conducting monetary policy at low interest rates. It now boasts a large arsenal of unconventional monetary policy measures including negative policy rates, large-scale asset purchases, forward guidance and credit provisions. How effective were some of these measures in stimulating economic activity the last time the target for the overnight rate reached the ELB?

This question is the focus of my work with Margaux MacDonald. Following the 2008 financial crisis, the Bank of Canada lowered the target for the overnight rate to 25 basis points (what was then believed to be the ELB) and turned to forward guidance and credit funding to continue to stimulate economic activity. In order to quantify the effects of these policies, we face two challenges in our empirical work.

First, Canada is a small open economy that is strongly influenced by international factors, most importantly those in the United States. Since the Federal Reserve embarked on its own unconventional monetary policies at the same time, it is important to control for their effect on the Canadian economy when assessing domestic policies. To deal with this issue we explicitly model the small open economy feature of Canada and include the U.S. in our empirical model.

Second, measuring the stance of monetary policy during this period is complicated by the fact that the overnight rate, the typical measure, was stuck at the ELB and fails to capture additional stimulus. Several alternatives are available but they are usually specific to a single policy. For instance, the central bank balance sheet captures large scale asset purchases since it grows as purchases increase but it fails to capture forward guidance, a verbal commitment to keep interest rates low for some time in the future. However, even though short-term rates are at the ELB, both of these policies have an effect on longer term rates, which are typically higher and not affected by the ELB. Thus we use information in the entire term structure of interest rates to back out a measure of what the policy rate would be if it were not restricted by the ELB. This measure is known as the shadow short rate and we estimate it using methods proposed by Wu and Xia (2016). 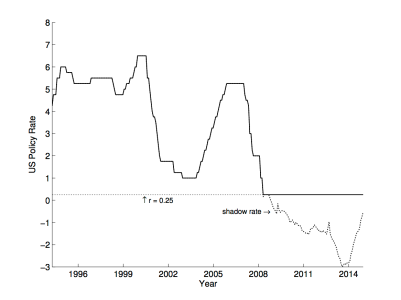 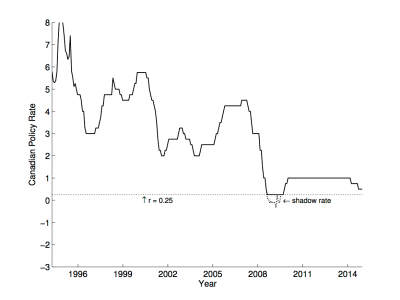 To quantify the effect of monetary policy at the ELB, we conduct counterfactual experiments. We first estimate the model and then simulate the path of industrial production (our proxy for economic output) under a scenario in which the shadow rate is restricted to the ELB. The difference between the simulated path and the data gives us an approximation of the contribution of unconventional monetary policy measures to output growth. Figure 2 shows these simulated paths under the counterfactual scenarios restricting Canadian and U.S. monetary policy, respectively. In other words, the blue lines show our estimates of the path industrial production would have followed without unconventional monetary policy in Canada (on the left) and without unconventional policy in the U.S. (on the right).

Our main finding is that Canadian unconventional monetary policy had expansionary effects on the Canadian economy, boosting output by approximately 0.23 percent per month on average during the ELB episode, which lasted from April 2009 until June 2010. We also find that Canadian output would have been approximately 1.21 percent lower per month on average without U.S. unconventional monetary policies from December 2008 until October 2015, the end of our sample.

Despite the strong influence from U.S. policy and the relative brevity of the Bank of Canada’s unconventional measures, our research suggests that the Bank of Canada was able to influence the Canadian economy at the ELB and will likely be able to do so again, if such policies are needed. 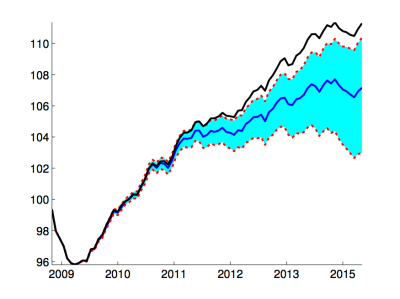 Figure 2 note: This figure contains the plot of Canadian industrial production along with its counterfactual path constructed by coming up with a set of structural shocks for the policy rate such that it is forced to respect the ELB. 68% error bands are constructed based on 2000 Gibbs sampling draws from the posterior distribution.