Licensed medical cannabis use in Canada has grown considerably in the last two years. From Health Canada’s website, we can measure the size of this market over a period of more than two years (Q1 2015 – Q1 2017). Figure 1 shows the growth in both the dried and oil cannabis. 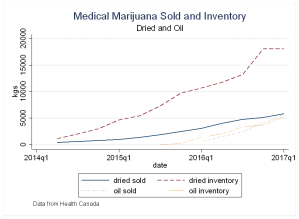 Not only are sales of dry marijuana growing (just under 6000 kgs in Q1 2017) but the inventories are increasing at an even faster rate (currently over 18,000 kgs). Oil cannabis has had a steady increase as well over the period it has been recorded (starting in Q4 2015).

There are 167,000 patients taking medical marijuana in Canada as of Q1 2017. But as Figure 2 illustrates there is actually a steady reduction in both the average shipment and the average authorized amount by the health care practitioners. If all these patients took their full authorized average per day (2.5 grams), the demand would be 35,500kg per 90-day quarter. 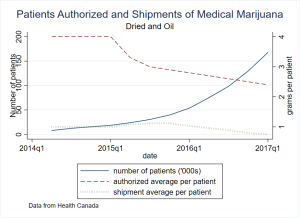 Prices for medical marijuana are typically listed for potential and current patients on the websites of licensed providers authorized to both cultivate and sell. Health Canada has not regulated the prices of medical marijuana. Selection of the marijuana product (dried or oil) is left to the patient but producers advise patients to consult with their physician. Most licensed producers offer both dried marijuana and cannabis oil. The names of individual products are typically whimsical like

The names of individual products are typically whimsical like Abcann’s Ice Cream or suggestive of potency as in Delta9’s Blue Venom. My favourite name is The WidowMaker (which is not sold in Canada).

Besides name differences and dried vs. oil, the prominent distinction in marijuana is the concentration of THC (tetrahydrocannabinol) and CBD (cannabidiol). The two are closely connected chemically but THC is psychoactive and is associated with “highness”. CBD does not provide the “high” and has been used in treatment of cancer patients with pain and nausea after chemotherapy. Health Canada has taken no stand on THC and CBD content, leaving the choice of mix and potency offerings at the discretion of the licensed producers.

Data on the pricing and percent content of THC and CBD of medical marijuana have been gathered by scraping the various provider’s web pages, and I am particularly indebted to Brad Martin of CannStandard (http://cannstandard.ca/author/cannstandard) for making it available to me.

These are the prices of 138 different medical marijuana products representing 20 of the 43 licensed producers as of April 22, 2017. The sample mean price of a gram of medical marijuana across all providers and products is $9.1/gram with a standard deviation of 2.5 grams. The distribution is surprisingly close to a normal. Figure 3 shows the histogram for prices.

The difficulty in comparing product prices is in making sure that the products compared are somewhat similar. The natural way to do this for marijuana is to use THC/CBD concentrations.

Brad Martin has developed price measures that look at each product solely as a THC, CBD and THC+CBD to develop comparative pricing across producers. The concentration of THC is often used as a metric of strength or potency. In our data, the highest THC concentration was 25.6% and CBD was 18%.

The percent concentration covariance is negative, where high (low) levels of THC are associated with low (high) levels of CBD (see Figure 4). There is a small mid-range where balanced concentrations of both are offered. Most licensed producers have options of either high THC or CBD or midway mixes. 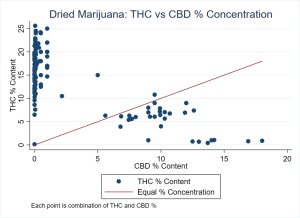 Historically a 10% THC concentration was viewed as very high content and I have used that as a divide for “low” THC (under 10%) and “high” THC (above 10%). But it is important to keep in mind that “more” is not necessarily better and hence not necessarily more expensive. The same company can price higher THC-content marijuana at a lower price. So, there must be other factors besides these at play – think of scotches with blends and single malts with different alcohol contents and flavours.

Below are some licensed producers and their $ pricing per gram over all their products above or below 10% THC. Some useful facts on product differentiation and price dispersion are evident. Some producers do not offer

Some useful facts on product differentiation and price dispersion are evident. Some producers do not offer low-THC products (Emblem and Emerald) and some producers have one price for everything (Aurora, Bedrocan and Canada’s Island Garden Inc. (CIG)). Some producers offer more than 10 products (Abcann, Hydopothecary, Tilray and Whistler). Price ranges can also be very broad suggesting there is some attempt to capture both ends of the financial market for their patients.

There is insufficient data to really do much price formation modelling but I did attempt some preliminary regression analysis (see Table 1). 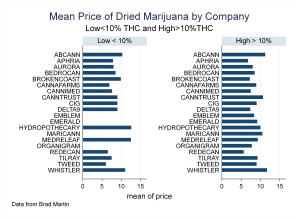 We focus on column 3 which is our largest model and allows for some nonlinearities in pricing. The regression results suggest that prices per gram rise in THC and CBD concentration with about 30 cents per each % concentration for the former and 24 cents for the latter (holding everything else equal). Patients in British Columbia pay roughly a dollar more per gram than all provinces except Quebec that pays a whopping $2.9 more per gram. Quebec has only one licensed producer and this higher price may reflect some monopoly pricing. BC has 9 and without more

Patients in British Columbia pay roughly a dollar more per gram than all provinces except Quebec that pays a whopping $2.9 more per gram. Quebec has only one licensed producer and this higher price may reflect some monopoly pricing. BC has 9 and without more information, it is difficult to judge why prices there might be higher. Clearly, more data on the specifics of each producer is needed to improve this pricing model.

There is a nonlinearity in the pricing of medical marijuana associated with the THC concentration. At high levels (over 10% concentrations) the price falls by about $1.7 per gram and continues on its previous slope and shows that price is not monotonic in THC concentration. Figure 6 illustrates one of the nonlinearities where we set CBD = 0 (to avoid the complication from the multiplicative interaction of THC with CBD term) and examine the price response to rising THC levels. 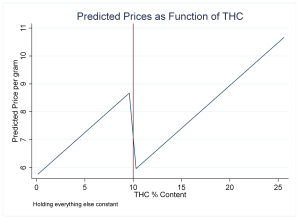 The pricing is such that producers appear to have a lower price marijuana for those patients who seek higher THC concentrations but are willing to forgo other desirable aspects of the product.