The 2017 Canadian Public Economic Group Meeting (CPEG2017) will take place on the Queen’s University campus in Kingston on November 2 – 4. This year’s meetings are being hosted by the John Deutsch Institute (JDI) and the Department of Economics. “We are very excited for the conference, which will feature presentations by some of the leading public economists in Canada,” said Dr. Christopher Cotton, the conference organizer and the Director of the JDI.

For more information on the conference, see the CPEG website.

Here, I review a handful of the papers that will be presented and discussed during this year’s conference. END_OF_DOCUMENT_TOKEN_TO_BE_REPLACED

Licensed medical cannabis use in Canada has grown considerably in the last two years. From Health Canada’s website, we can measure the size of this market over a period of more than two years (Q1 2015 – Q1 2017). Figure 1 shows the growth in both the dried and oil cannabis.

Not only are sales of dry marijuana growing (just under 6000 kgs in Q1 2017) but the inventories are increasing at an even faster rate (currently over 18,000 kgs). Oil cannabis has had a steady increase as well over the period it has been recorded (starting in Q4 2015). END_OF_DOCUMENT_TOKEN_TO_BE_REPLACED

Building on the research behind a recent article in the Canadian Journal of Economics (Head and Lloyd-Ellis, 2016), we develop an economic model of housing markets and use it to rank Canadian cities based on the percentage difference between predictions and real world prices. This gives us the following excess valuations by year.

END_OF_DOCUMENT_TOKEN_TO_BE_REPLACED

Monetary policy may focus on price level targeting (PLT) or inflation targeting (IT). The distinction between the two frameworks is that under IT, the central bank does not respond to temporary deviation of prices from trend. Bygones are bygones. In contrast, with PLT, past inflation performance matters and past deviations must be undone to restore the price level to the target path. END_OF_DOCUMENT_TOKEN_TO_BE_REPLACED

Eric Richert summarizes his essay, “Estimating an Effort Coordination Game Between Parents and Their Children,” which was a co-winner of the 2016 Scarthingmoor Prize for best MA essay in economics. Eric is currently a PhD student in the Queen’s Economics Department.

Student learning typically requires effort provision by parents, teachers, and students.  However, the early education literature all too often ignores student effort focusing only on the effort of parents and teachers. The effort decision of the child is often excluded from the optimization problem that is solved by the parent, or is a decision made by the parent.   The traditional model strangely ignores the child’s decisions. This assumption may make sense in early childhood but is less believable as students move into high school and beyond, where they are able to make their own decisions.

In my research, I examine the effects of allowing children to make their own decisions regarding the amount of effort they put into their studies.

END_OF_DOCUMENT_TOKEN_TO_BE_REPLACED

Housing prices, housing affordability, and the impact of offshore money on residential real estate in Vancouver are not new topics. However, policies to address these issues are new. Beginning last August, foreign purchases of residential real estate in Metro Vancouver are subject to an additional 15 percent property transfer tax. In addition, last month, the provincial government announced repayable down-payment assistance for first-time homebuyers in B.C.

As consumers we associate higher tax rates with higher prices. In the usual case of a tax imposed on all consumers, this is correct. However, in the case of the foreign property transfer tax, prices will decrease (or appreciate less). Here is a stylized analysis showing how the foreign property transfer tax decreases housing prices. END_OF_DOCUMENT_TOKEN_TO_BE_REPLACED

U.S. Rep. Mick Mulvaney, Donald Trump’s pick for budget director, has attracted attention for asking, “Do we really need government funded research at all?” Although it’s not clear whether Mr. Mulvaney is against all government research funding, the question raises concerns of academics and proponents of evidence based policymaking.

Coauthor Arnaud Dellis (UQAM) and I speak to the impact of government funded research (or the lack thereof) in a research article (ungated) published in the most recent issue of the Journal of Law, Economics and Organization. END_OF_DOCUMENT_TOKEN_TO_BE_REPLACED

In 1980, Canadian men with a bachelor’s degree earned approximately 32% more than those with a high school degree. For women, the equivalent figure was 44%.  By 2005 the university to high school wage premium had increased to about 41% for men and 51% for women (see Figure 1).  The rise in the wage premium over this time period shows just how important post-secondary education has become at an individual level. 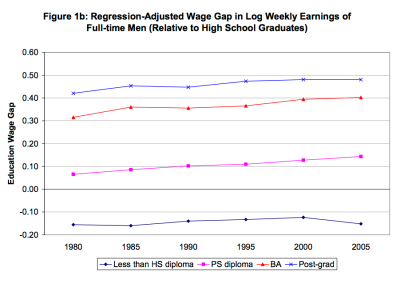 Wage gap for men. Figure from Boudarbat, Lemieux, and Riddell (2010).

Wage gap for women. Figure from Boudarbat, Lemieux, and Riddell (2010).

In a recent working paper, titled Student Aid and the Distribution of Educational Attainment, I examine the effects of providing post-secondary funding on educational choices in the context of a large program for Indigenous students in Canada.  END_OF_DOCUMENT_TOKEN_TO_BE_REPLACED

Some technological advancements are skill-complementing, meaning that they tend to increase the productivity and demand for skilled workers. Other technological advancements are skill-replacing, meaning that they tend to reduce the demand for skilled workers and raise the productivity and demand for unskilled workers. Electronic computers are typically considered a prime example of skill-complementing technologies, whereas assembly lines and the use of interchangeable parts in the manufacturing industry are classic examples of skill-replacing technologies.

Disentangling the impacts of each type of technology is important for understanding of the impact of technological changes on labor markets.  END_OF_DOCUMENT_TOKEN_TO_BE_REPLACED